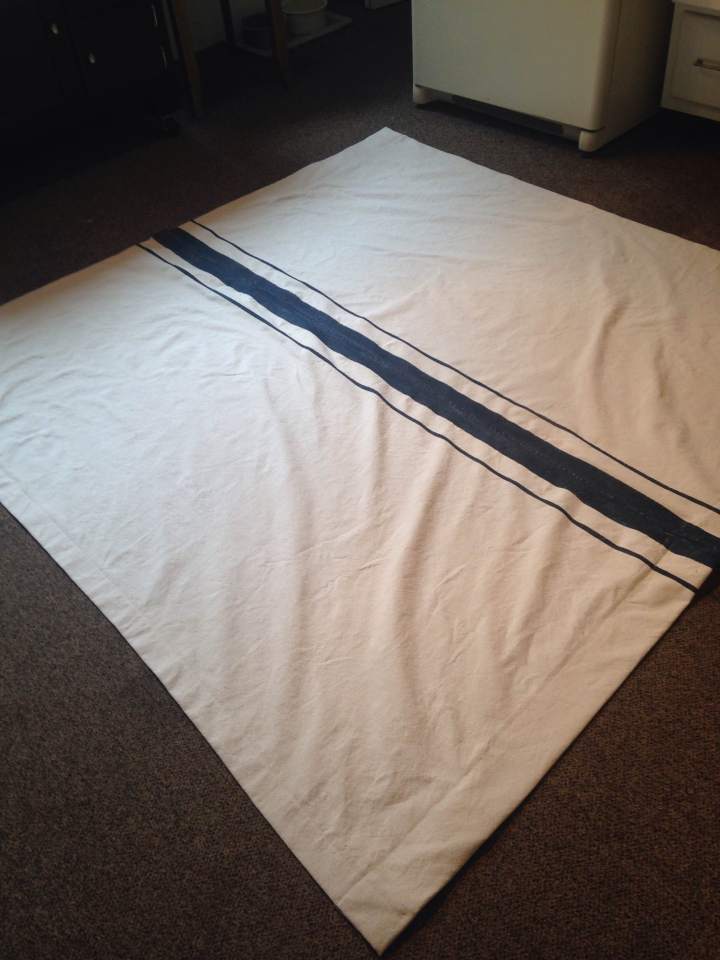 I’ve been meaning to make a shower curtain for our downstairs bathroom for a few months now. The bathroom actually has a handicap-accessible shower that was there when we moved in, so the shower curtain has to reach wall-to-wall and all the way down to the floor.  The store-bought version I already had was just a few inches too short.

Since we aren’t planning on overhauling the bathroom anytime soon, I’ve been doing a few quick projects to freshen it up. We took down the massive cherry-colored medicine cabinet and put up a simple pewter framed mirror and painted the matching cherry cabinet an ivory-beige to mask the ivory shower surround and sink. After removing the 90s textured white and gray abstract wallpaper, we painted the walls and ceiling to match the cabinet, which, I think, makes the small room look larger and more modern. I also changed out the 80’s shiny brass hardware on the cabinet for simple silver knobs and painted the matching door handle in a matte silver. The final step was painting the ivory ceramic tile floor. I cleaned and lightly sanded the tile, used a bonding primer and then two coats of porch and floor paint, followed by two coats of matte poly. I might actually repaint the floor soon, as the dark gray color I used came out more blue than I expected. 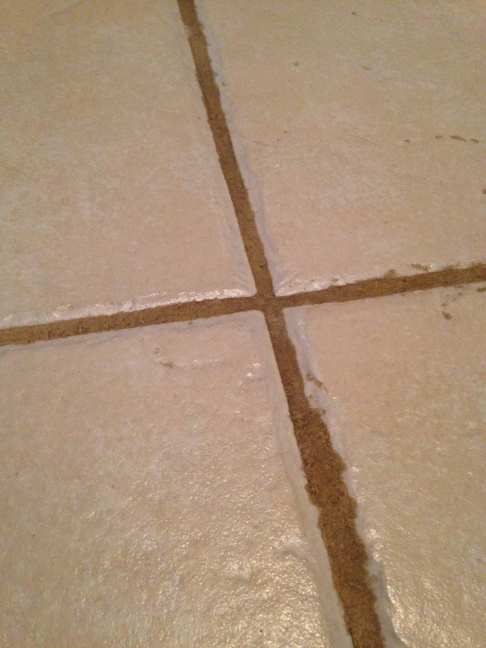 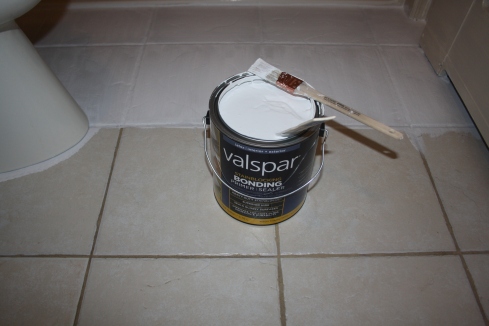 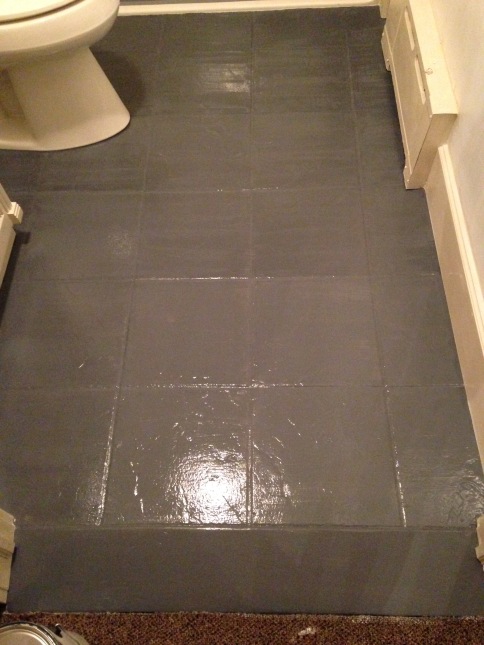 But a bathroom without a shower curtain looks pretty naked no matter what else you do to it, so I really wanted to get that done. I’ve been really inspired by natural canvas, antique grain sacks, and ticking striped fabric recently, so I knew I wanted to do something along those lines: 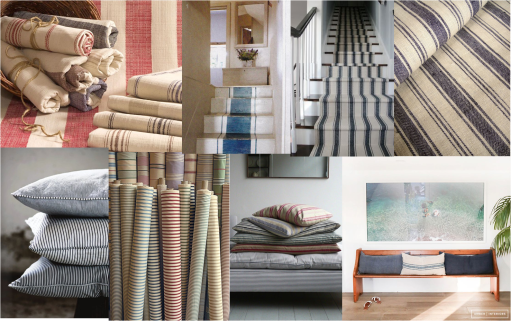 So I picked up a 9×12 canvas dropcloth and some navy latex paint and got to work. The drop cloth wasn’t the easiest thing to work with because it’s heavy, very large, and the seams are not straight or square. The 9×12 drop cloths have a center seam, so I measured everything from that seam so that it would be straight and centered when it was finished. I didn’t have an open space large enough to lay the whole thing out, so I laid out one half at a time.

Then, I used the square to cut a straight line across the top and measured the length that would reach from the top of the shower curtain to the floor. (I used the shower curtain liner to reference where the top of the curtain would start with the curtain hooks I was using.) I added 7 inches at the top and 8 inches at the bottom for a 3.5 inch seam doubled over and a 4 inch seam doubled over. I only measured the length on one side, folded the curtain in half, and cut through both layers, to save time.

Once the curtain was cut out, I ironed it, measured and pressed the seams into place, and then stitched all the seams, starting with the sides and ending with the top and bottom. Sewing was the quickest step. Altogether, these steps took me about 2 1/2 hours. 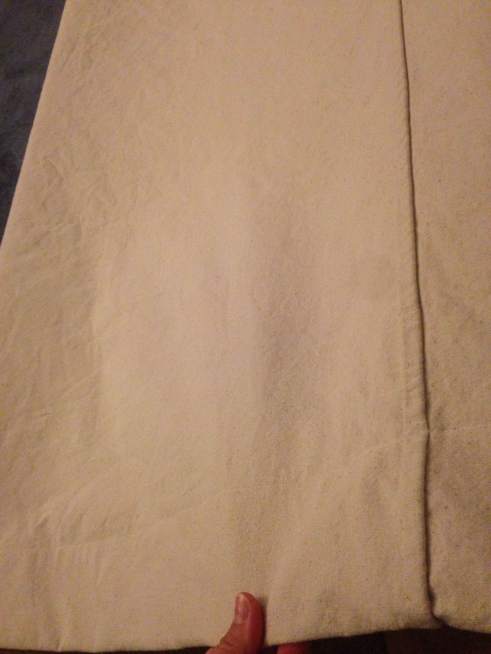 The next day, I laid the curtain out on our kitchen floor to paint it (we are removing the rug soon, so I don’t care about ruining it with paint; but make sure to put something underneath if you are doing this project in your own home!). I used the square again to make sure the tape was perpendicular to the top and bottom and taped out a large ticking stripe down the center.

I used an old paint brush to very lightly paint a layer of navy blue paint on the stripes. I wanted to do a light layer at first to a) make sure it didn’t bleed through the lines too much and b) make sure the lines weren’t too perfect as I was going for more of an old grain sack look. Below is what it looked like after the first layer. I thought it looked a lot like denim, which was pretty, but I wanted the stripes a little darker.

And here is how it looked after a second coat.

Then it was time to put in the grommets so I could hang it. I bought a set of grommets and a grommet punch. (Make sure to check that you have the correct size grommet punch; they are not universal! I learned this the hard way, of course.) The grommets were really easy to put in. Reference your shower curtain liner to see how far down you want the grommets to be. Then, mark where the two grommets on each end will start. Most shower curtains have 12 grommets, so after you mark the ends, measure the distance in between and divide it by 11. That will give you the intervals where the final 10 grommets will be placed. After they are all marked out, cut a tiny hole where each grommet will be. Test a grommet top and bottom in the hole to make sure it’s big enough so that no fabric will show through the middle of the grommet but small enough so that there won’t be a hole outside the grommet. 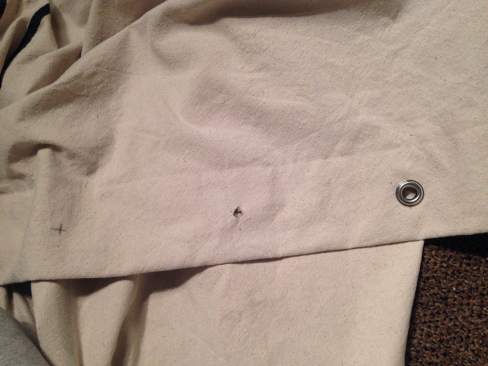 Follow the directions that come with the grommets for how to attach them. 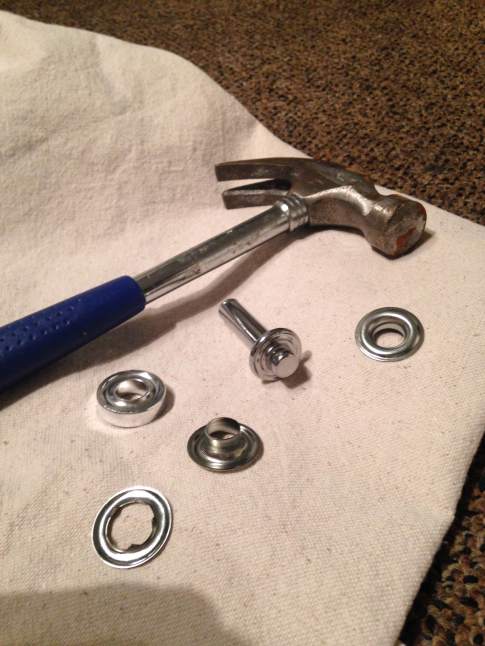 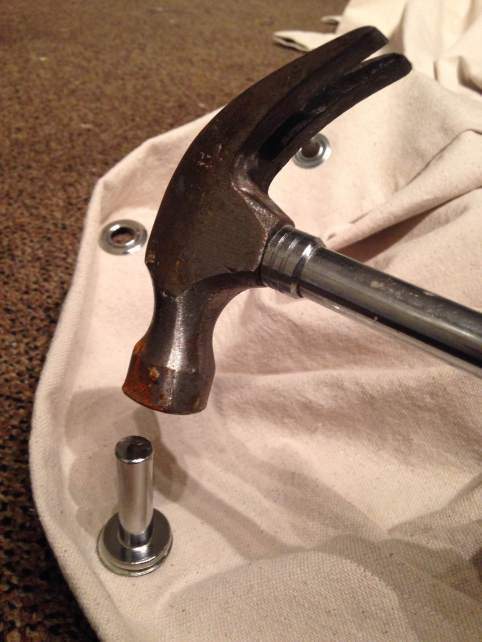 And, the finished product. I really love how substantial the new curtain is, and the simple design and texture of the fabric are so pretty to look at every day. Now, to add in some color with art and other decor!